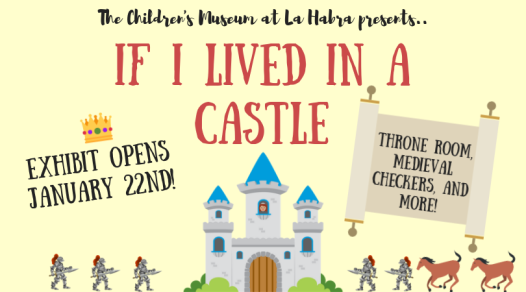 Last week we celebrated the opening of our exhibit If I Lived in a Castle, a throwback to the land of Kings, Queens, and Court Jesters! For our very first blog post of the year I wanted to interview the mastermind behind the exhibit, Lisa Reckon! Lisa is the Alpha and Omega of every changing gallery at the Museum. She is the artist behind the blueprints, the interior designer, and the hand holding the hammer! Lisa builds all of our changing galleries starting with an empty room and building from there.

Curator of Exhibits and Education!

How long have you had your position? What were you doing before this?

You’re asking me to count?! Let’s see.. It’s been 9 or 10 years! Before this, I was exhibits coordinator which is another position here–everything I’m doing now but with no paperwork!

What is your favorite part about building exhibits meant for play?

Well it’s really fun when I go in there and I see the kids having a great time. It’s a way for me to expend some of my creative energies in a way that gets me paid!

What is the hardest part of creating and building exhibits? 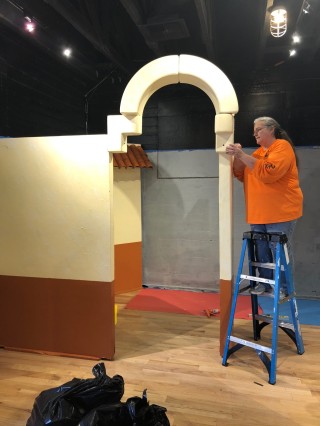 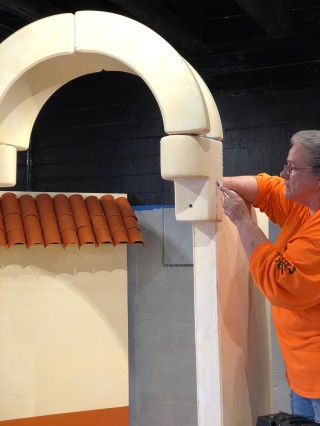 Probably working as we do with a tiny budget. Our Museum Guild brings in quite a bit of money but we have $9,000 for each changing gallery exhibit that we do, so I really have to pound my brain and figure out, “How can we do this? Can I re-use and re-paint something else? Where can i find something that will stand up for five months of kids pounding on it but it’s not that expensive?” It’s a lot of trying to envision what’s going to happen to those things and then putting them into the exhibit and making it happen within my budget!

What has been your favorite creative object transformation?

Let’s see. For one exhibit, we needed a space shuttle. My options were buy a blow-up space shuttle that would last 30-seconds or spend my entire budget on a space shuttle. There was no in between! So I had to design and build a space shuttle! I found plastic potholders and transformed them–and they were perfect! So I painted them, screwed them in to the back, and it totally looked like a rocket! Basically I have a really good eye for looking at stuff and going, “Well, geez, if you just did this to it then it could be something else!” 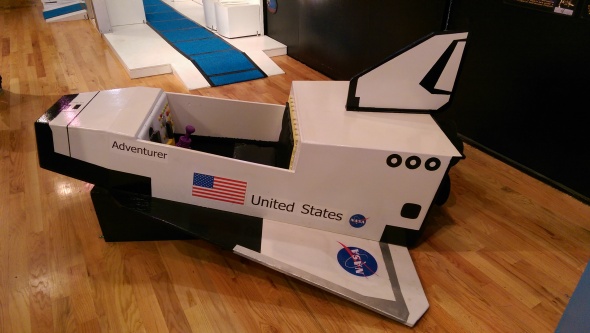 What has been your favorite exhibit to build?

Well, I really liked building Castles and Kings. The exhibit now [If I Lived in a Castle] is kind of the same with a few tweaks and the kids have such a great time in there. I also had a really great time with Time of Giants. That was a real stretch! You know, you can find dinosaurs everywhere but it’s really hard to find Ice Age animals and information about them. It was fun to have actual artifacts in that exhibit. For instance, the arrowheads and cutting tools were actually 8,000-10,000 years old! That was great that I had the budget to acquire something that was an actual exhibit piece and not something that was fake or plastic. Even though they were under acrylic, it was awesome to hold something that old. I was holding a hide-cutting tool and it fit perfectly into my hand, just the way that it had fit into the hand of some person 10,000 years ago. That was an awesome bit of history where I really felt… connected to my ancestors and history.

What do guests have to look forward to in If I Lived in a Castle?

It’s bright, interesting, and really inviting! It’s one of those exhibits where kids can really put themselves into the moment. You go in there and there are kids wearing the armor, the crowns, being little lords and ladies! They’re imagining themselves in that moment. This morning I was watching these girls in the apothecary taking the ingredients and shaking them over the mortar and pestles. Of course, nothing is coming out, but they were grinding and shaking–just like they were putting ingredients in there! The kids get it– they know that they are making medicine using dragon’s blood and frog’s breath! That’s always fun to watch.

Thank you Lisa for carving a bit of time for me. Right after this interview I’m sure Lisa went to sand something that she’s building, she’s always on the go! Come see Lisa’s latest exhibit, If I Lived in a Castle and see the work for yourself!